The latest recession appears to have hit the Australian housing market fairly hard, and some worry the housing market might slide hard from here to May.

Some housing market experts forecast a dim outlook.  Adelaide Timbrell, senior economist at ANZ. believes Australian housing prices are on a steep decline and will likely fall more in 2023, to a peak-to-trough drop of 16%, which is more than double the the 2008 financial crisis’ home price plummet.

A Reuters News housing market poll predicted average home prices would decline 7.3% this year and a further 9.0% in 2023.

Yet other experts remain confident in the 2023 outlook for the country. SQM Research’s managing director Louis Christopher believes the stats confirm his relatively positive outlook on housing for 2023.  He cites a lack of listings and that the worst has already happened.  He speaks of investors/buyers who will come forward when the market hits bottom soon.

Australian Buyer’s Hopes Not Too Strong

Rising rates, global trade downturn, rising inflation and fuel costs have ganged up to deliver bad news to Australia’s home buyer hopefuls.  Australian consumers too are decided sour on the outlook as this RBA graphic shows. 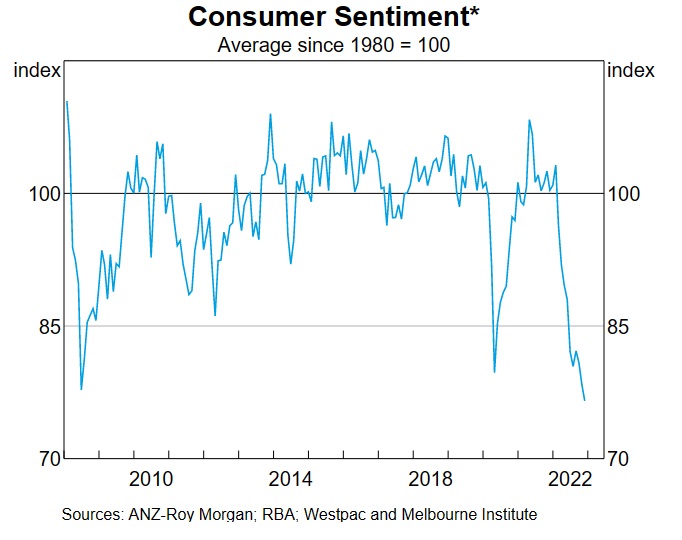 Their sentiment is worse than in the 2008 market crash.  And ANZ Research predicts that buying power is what will tank the market, not necessarily prices.

Will the Economy Hold Up?

Australian GDP output, wage levels, consumer debt loads, and the employment rate will factor into the housing forecast for 2023. As this graphic from Statista shows, the outlook for GDP is positive. 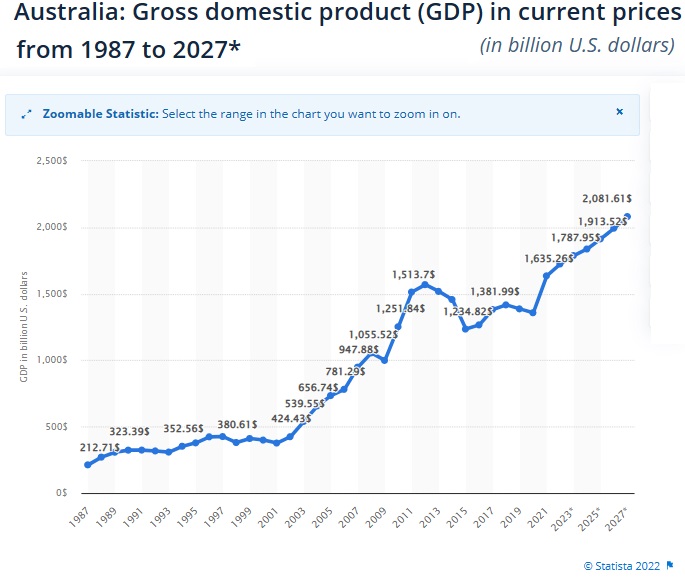 Worker wages were on a steep rise, however rising interests are aiming to stop that growth. 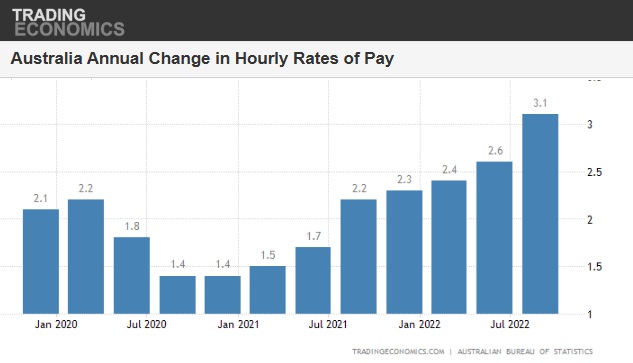 Household debt, and housing related expenditures are at record levels and affordability leaves many feeling gloomy about the prospects of buying a home. It supports demand for the Australian rental market however.

Australian housing prices rose 50% above affordability due to this year’s inflation and due to higher debt financing costs. Australian families must spend 40% of their income for housing.

A news release had CoreLogic’s head of research, Eliza Owen, suggesting the pace of decline has been slowing on a “broad basis since September and … While this may be seen as a positive by some, there is still risk of the decline re-accelerating in the year ahead,” she said.

What Are the Key Risks of a Steeper Downturn?

6 factors may decide market direction in 2023:

Corelogic’s stats do reflect a sizable downturn in sales and home prices. Their latest report shows a 3.2% drop in median prices year over year for the entire Australia continent. Also the spring rebound didn’t materialize this year leaving many to speculate sales could drop further when fall season approaches. 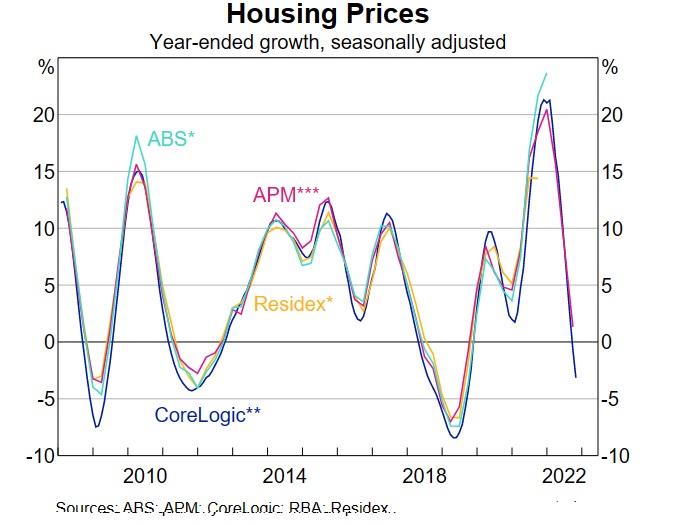 Home prices have dropped 5.2% in the Capital cities and South Australia has suffered price downgrades of more than 18% year over year. Western Australia had a 6.4% drop in prices.

And as RBA’s report shows, price drops in the higher priced home category have declined faster. 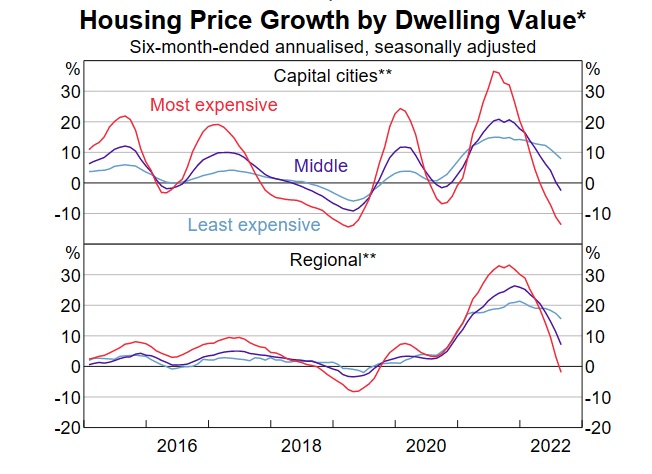 The number of million dollar neighborhoods in Australia have declined significantly. Those capital city neighborhoods with the biggest year over year drops in price included: Narrabeen (-26.8%), Surry Hills (25.4%), Redfern (-25.3%), Birchgrove (024.4%) and Waverly (-22.7%) where median prices are still $3.1 million.

However, Sydney and Melbourne are seeing home price growth with quarterly gains of 4.4% and 2.7% respectively.

Corelogic’s report shows the rolling 28-day change in the home value index fell -1.0% through November. Latest data shows even further decline which could mean it’s all downhill from here.

Sydney homes prices have receded 11.4% since the record highs of 11 months ago. Melbourne home prices are down 7.1% from last January, down .8% in November, and in the previous quarter, prices fell 2.7% which means home prices are falling faster.

In Brisbane, home prices declined 8.1% since record highs last January, and are down 5.6% in the last quarter, and are down a surprising 2% in November.

In Adelaide, home prices are only down .9% since last January’s record heights. Year over year, home prices in this city are up 13.4%, and yet in November, have fallen .3%.

In Canberra, home prices reclined 6.5% since the record highs in January, are down 3.8% over the last 3 months, and down 1.2% during November. 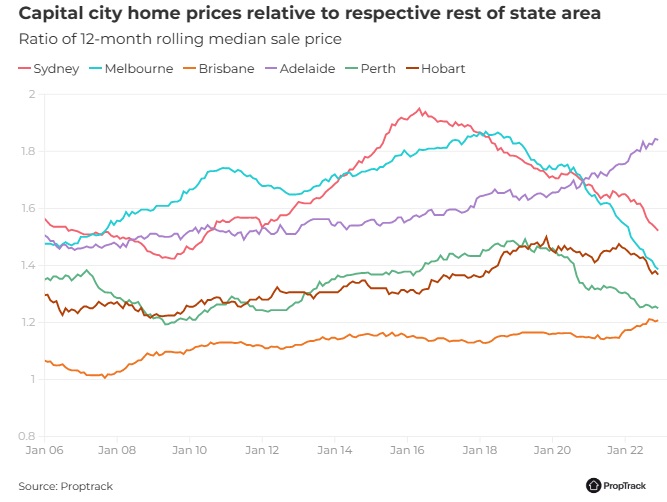 Home Sales in Australia in November

It Takes Longer to Sell a House in Australia

Country wide, days on market for homes has increased by ten to 42 days which by any standards is very high. In the capital cities, DOM rose to 32 days compared to 19 days one year ago. DOM in Sydney is 39 compared to 20 days one year ago while in Melbourne, it rose to 31 days from 23 last year. Brisbane rose from 12 days to 32 days this year, while Adelaide saw its DOM stay the same at 32 days.

As the Corelogic chart below shows, new listings have taken a drastic downward turn as homeowners hold onto their properties. New listings are down 26.3% vs 12 months previous. Falling prices and higher refinancing rates may be the top factor in this situation.

Total home listings dropped by 6.7% and generally fall at this time of the year right to February.

Hobart, Darwin, Canberra and Brisbane bucked the trend in increases in homes listed for sale.

As in most cities and countries around the world, rent prices in Australia rose. Prices overall rose 10.2% year over year, while the capital cities saw increases of 10.7%.

As more buyers moved over to the rental market, rent prices in Sydney, for all rental types, rose 11.1% while in Melbourne, they rose 9.4%.

We’ll keep you updated as Australia’s housing market progresses in 2020.  Take a good look at the California housing predictions and the best cities to invest in to capture maximum yields.