Although rent prices generally are climbing fast across the nation, they are dropping significantly in some of the major metros including New York City, San Francisco, Seattle, San Jose, Boston, Honolulu, Los Angeles and Washington DC.

If it wasn’t for the Corona Virus invading the US in March, the apartment rental market would look very different. As we approach 2021, the virus remains the biggest threat for apartment landlord businesses in the major metros.

We’re wondering how landlords should be responding to the weakening market in inner cities.

Will bankruptcies climb as rents can’t be collected? Will stimulus failure lead to massive evictions? Will landlords begin to sell off multifamily and apartment buildings and begin to invest in single-family houses in smaller cities and towns?

After the election and a perhaps slower economic outlook, will rocketing asking rents in other hot cities lead to additional migration of renters? Will fast falling rents discourage further renter migration out of the big cities? Can landlords provide incentives to keep tenants? 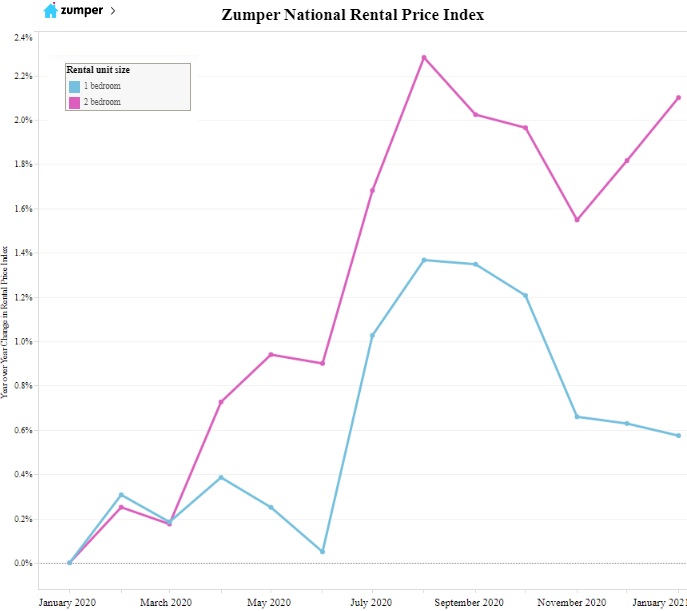 In San Francisco, one bedroom units are down 24% and two bedroom prices have shrunk by 22.8%.

Major cities with the most severe rent price drops:

These cities saw the fastest drops in rent in 1 Bedroom apartments vs the previous month. The falls are likely due to work shutdowns and failed stimulus which gave unemployed, financially strapped renters few options.

Cities that had year over year rent increases were likely due to those fleeing pandemic cities for lower rents.

And cities where 2 bedroom apartment rent prices are rising vs the previous month, these cities topped the list:

You can view the full set of recent rent prices at zumper.com/blog/rental-price-data/.

Overall, Zumper found that 1-bedroom median rent prices remained flat across the US at $1224, while the 2-bedroom median increased 0.3% to $1491 per month.

Census.gov reports that rental vacancy rate has climbed back up sharply to 6.4%. With asking rents climbing fast across the country and economic changes about to hit, we’d expect some turbulence in many rental housing markets. 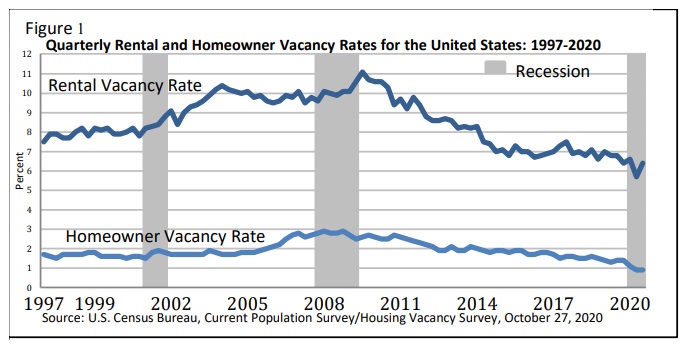 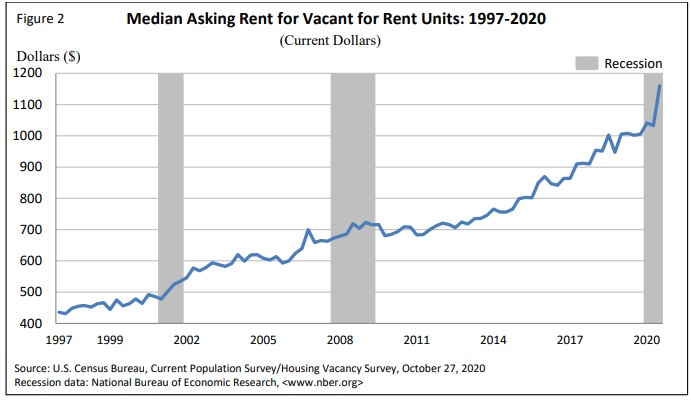 The question right now is whether the recent elections will change the migratory trends. Without a stimulus deal, more landlords may find rent collections tougher and more cash flow problems occurring.

If borders are opened, it could deflate the markets in the heartlands and small towns which had benefited during the last 4 years of Republican rule. Could we see a return to the inner cities of the major metros if small US towns begin to suffer an economic downturn?

Jobless claims are rising and unemployment remains a significant threat and stimulus may not be coming even after January when President Trump leaves office. The cities that saw the biggest rises in unemployment in September included: Kahului-Wailuku-Lahaina, Hawaii (−29.6%), Lake Charles, Louisiana (−19.6 %), and Ocean City, New Jersey (−18.3%). 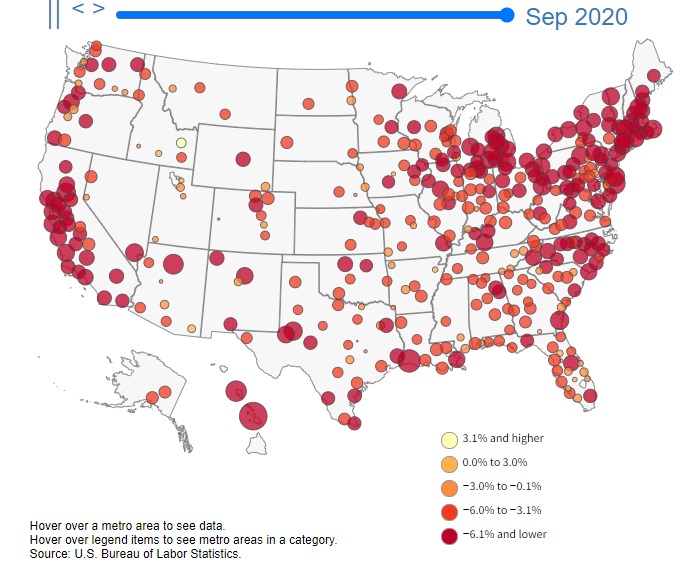 The pandemic induced work from home trend has driven big change in the apartment rental sector. Will house renters and homeowners in these towns consider moving back to regain employment opportunities in the big cities? Or is work from home a permanent cost-saving priority for all companies going forward?

Without a big stimulus spending package and with the continuation of social distancing and restaurant/entertainment/office shutdowns, will the migration out of cities decline? Or is a fear of political unrest and violence going to ensure a continuous outflow from the cities to towns and other states? 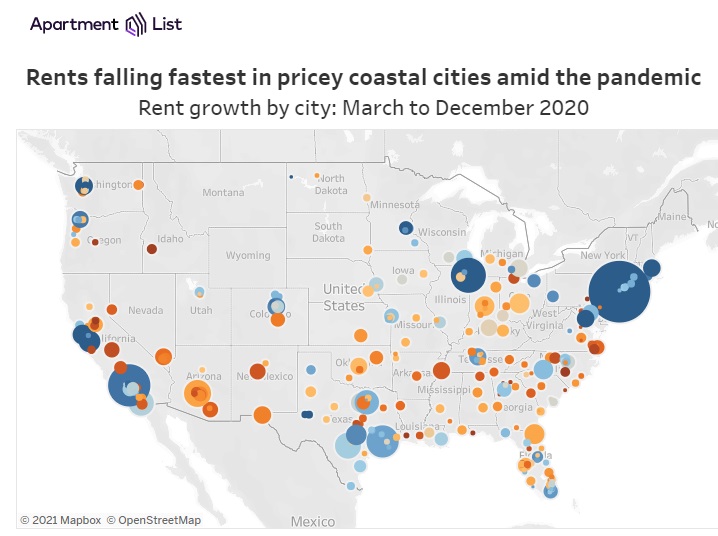 Seattle and Boston saw the most deepest December rent drops (3.6% and 3.1% respectively),

In San Francisco, the most expensive rental market, Apartmentlist reports that from April through early-August, 35.6% of inbound searches to San Francisco came from outside the metro. That’s down from 47% 12 months ago. Fewer people are interested in moving to the Bay Area.

In fact, Apartmentlist stats show there are much fewer rental inquiries from out of state renters, in all the big tech hubs including Denver, Seattle and Raleigh.

The question for California apartment landlords and property managers, is how to price their apartment vacancies and where new rental inquiries are coming from.

The election of Joe Biden is meeting with much approval from Silicon Valley, yet if the Senate is controlled by the Republican party, it may not be party time for the tech companies. That will affect their financial status so again, they may not be calling their workers back from their work at home placements, at least for the next 12 months.

In the meantime, major metro landlords will need to be creative, innovative and clever to fill their empty units and collect rent in 2021.  Some ideas might be in improving renter incentives, improving tenant marketing, improving profit margins, and adopting technology.