Are you planning to move to the Los Angeles area soon?  That elusive apartment vacancy will come with a slightly higher price.  And while LA rents are up, they’re actually less than US apartment price rises.

Some of the rise might be attributed to summer demand, but a lack of rental housing is likely the culprit. Programs are being developed in California, as an example, to ease the rental market situation at the lower end, however there is a clear need for a large scale solution, especially in the multifamily sector.

After a lull during the winter, it seems the Los Angeles housing market is coming alive again. For renters, it means higher apartment prices and perhaps constrained apartment availability. In fact, a report from CurbedLA suggested Los Angeles needs 600,000 more rental units.

That extreme shortfall means your LA apartment search will be tougher and rental prices will likely rise as LA’s economy heats up.

“When you’re spending so much of your income on rent, that money’s going to landlords instead of grocery stores,” says Alan Greenlee, Southern California Association of Nonprofit Housing Alan Greenlee — from post on la.curbed.com 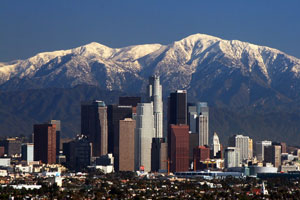 According to ApartmentList.com, rental prices rose slightly in Los Angeles last May, and up 1.9% YoY.  That was a small rise of $50 per month which pushed the price of a 2 bedroom apartment to $1750 per month and 1 bedroom to $1670 per month.

Although apartment prices are high and rising, they’re actually lower in Los Angeles than in California, and lower than the inflation rate and the rate of wage growth. That’s one bright spot in an otherwise tough rental market for Los Angeles renters.

As this graphic from Apartmentlist.com shows, rents in some communities are much higher than the average or climbing much faster.  Apartmentlist says across California the average 1 bedroom rents to $1448 per month while 2 bedrooms go for $1846 a month. That’s a 1.2% rise year over year. 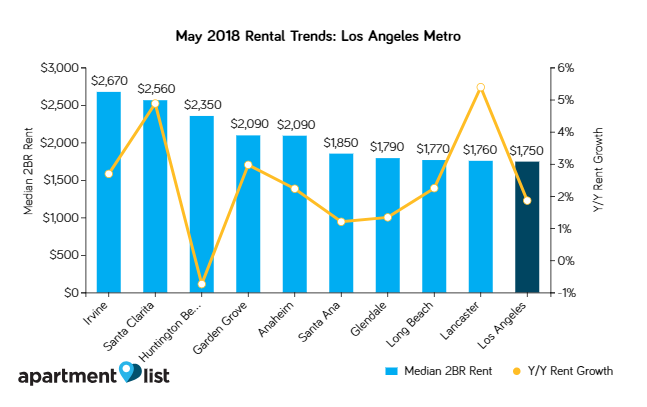 Apartment rental rates in other US cities such as San Francisco, San Jose, New York, Boston and San Diego are higher on average. Santa Clarita (4.9%), Garden Grove (3%) and Lancaster (5.4%) were the LA communities with the highest price rises.

Rent Jungle posted its May apartment rental rates. It says that in May, the average rent price for an apartment in Los Angeles, CA rose 8.72% from last year, and now stand at $2742 per month. Their prices for LA apartment rose 7.15% over last month’s average price of $2546.

Some LA communities are in demand while others are not. Tenants hoping to find affordable rents in Brentwood, Hollywood Hills, Brentwood, Playa Vista, West Los Angeles, Westchester and Venice will need to do their apartment search well and act fast. 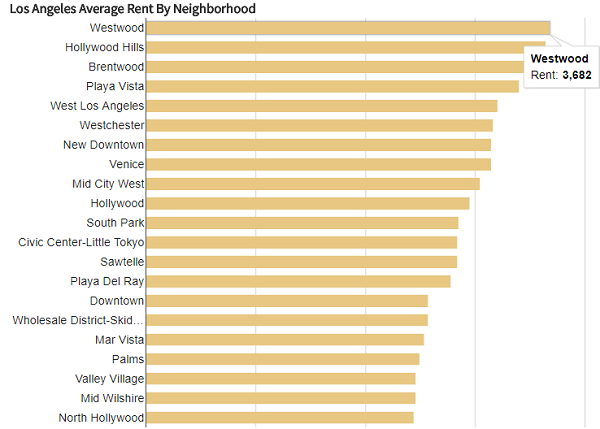 Our conclusion, based on prices, is that there’s still a strong opportunity for rental income property investment in Los Angeles. A lack of apartments for rent combined with severe competition from tenants, rising wages and a good LA economy spells continuous pressure on rent prices — a positive signal for investors and property management companies.